Having experimented with dry hopping sour and wild beer this past summer (as well as actually dry hopping a batch), I thought it would be a great idea to document some findings based on our experiments. The results were surprising to me as some of my favorite hops didn’t work as well as I expected.

To begin I should explain the base beer. The base beer is what I call a “Belgian Blonde”, although the name is a bit misleading. It’s basically a medium strength American blonde ale, but uses Belgian yeast. You can read the recipe here. This beer was fermented, then aged in a freshly emptied 65 gallon Chardonnay barrel for 2 years. The base beer imparts flavors of oak, vanilla, Chardonnay and a clean sourness.

We opted to test out 4 different varieties of hops, then also mixed and matched with different blends to find the right combination of hops for our base beer. We selected the hops based on our taste preferences when using them with IPA’s and Pale Ales. We tried the following varieties:

To test out the hops we added an ounce of each variety into a Muslin bag then into a french press with about 32 oz of sour beer that we pulled from our barrel. The hops were immersed for about 10 minutes and then pressed. There were 3 of us tasting so we split the 32 oz into 3 tasting glasses and labeled them.

The 3 or us tasted each one and gave our input. Based on the initial taste we ranked them in the following order:

We then did 50/50 blends of each the hop varieties with one another, followed by 75/25 blends. Surprisingly, I couldn’t find any combination with Citra or Nelson Sauvin that worked with our base beer, despite loving the hops in other styles. They just didn’t mesh well with the barrel character of the base beer.

We enjoyed the Amarillo character, but too much of it lended that funky flavor we found in the Citra and Nelson sauvin. In order to still get some of that character, our ideal blend ended up being 1 part Amarillo to 3 parts Huell Melon. We translated that directly to ounces e.g. 1 oz Amarillo, 3 oz Huell Melon.

We dry hopped the sour beer for about 2 weeks before bottling and conditioning.

Recipe for the base beer can be found here. 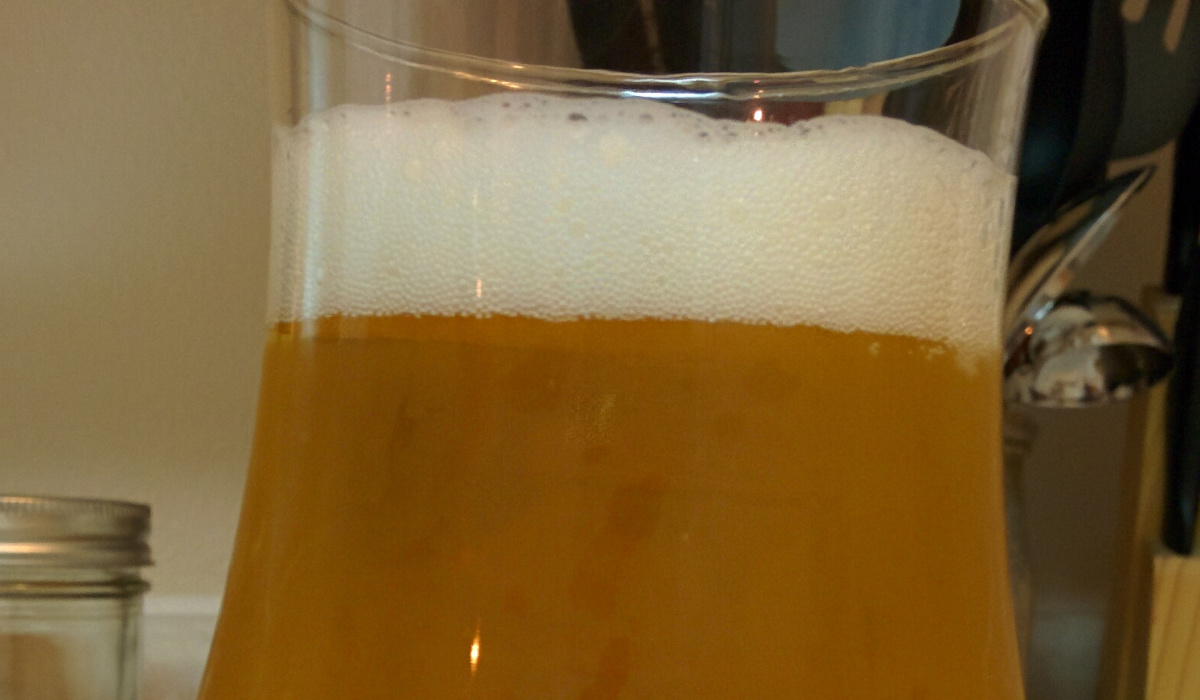 The aroma is notably different than the base beer. There is still a strong Chardonnay presence, but the vanilla is much more muted. In it’s place are citrus and peach aromatics.

The carbonation is spot on with this batch. It’s about medium – high in carbonation. The bubbles seem to accentuate the perceived sourness. It’s light in body but still has a softness that the carbonation can’t scrub away. In terms of mouthfeel and carbonation, this is exactly where I wanted it.

This version of the beer is actually more drinkable than the base beer with the help of the hops. Despite it having more perceived sourness the hops flavors seem to tame the sourness in the finish making it even more drinkable. There are several waves of hops. It begins with some citrus that bleeds into the Chardonnay and oak character from the barrel. There is sourness throughout but it’s blow is softened by some peachiness (presumably from the Amarillo hops) in the finish.

This was my first time experimenting with using dry hops in a sour beer and I think it turned out extremely well. I would definitely be interested in trying out some other hop varieties in the future with this base beer.